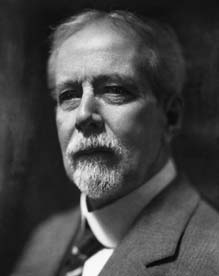 At the beginning of the twentieth century, when art
was traditionally classical and staid, Lorado Taft
made it romantic and personal. Taft is known for his
large scale public works, many of which are in
Chicago.

Taft enjoyed commissions that allowed him to
interpret and express complex ideas. He believed
that public monuments can reflect the
ideas and ideals of their time.

Born in Illinois, Taft developed his neoclassical style
at L’Ecole des Beaux Arts in Paris. Upon his return
to Chicago, he opened his first studio at this location, and began teaching at The Art Institute of Chicago, where he would remain for two decades. He taught at the University of Chicago and the University of Illinois as well. His rise to
popularity began in 1893 when his sculpture was displayed at the World’s Columbian Exposition. Ten years later, his influence on an entire generation of artists was sealed with the publication of his book The History of American Sculpture.

His greatest works include The Fountain of the Great Lakes (1913),
installed at the Art Institute, and Fountain of Time (1922), which is
located at the west end of the Midway Plaisance.